A fully decentralized public chain that everyone can get and use Wakacoin.

In simple terms, blockchain can be seen as a way of bookkeeping. Each user holds an account book, for example, if there are 10 thousand users, it means there are 10 thousand account books, and these books are kept in sync through blockchain technology. Therefore, even if a small number of account books have been tampered with, they will still be recovered to the information recorded in most books when they are synchronized. So, this bookkeeping method has a feature that cannot be tampered with.

The first application of blockchain technology in history is widely known as Bitcoin. Bitcoin has been in existence for more than a decade, this proves that the blockchain is a feasible way for bookkeeping.

However, each blockchain has its own consensus, it records issuance numbers of digital currency and specification. The specification has the advantage of being non-tamperable, but it also limits the application of the blockchain. Therefore, when the concept of blockchain is understood and adopted by people, there will be more blockchains in response to various application scenarios.

Next, this article will introduce to you a fully decentralized blockchain called Wakacoin.

The developer of the Wakacoin blockchain refers to the experience in the history of blockchain in the ten years from 2009 to 2019, including consensus protocol, system architecture, open source code, then built Wakacoin Blockchain from scratch.

Wakacoin is designed as a new blockchain that aims to solve the problems of the two early blockchains, Bitcoin and Ethereum, with the quantum era in mind.

Quantum computing will enable great innovations in the future, but it will be accompanied by risks. The key cryptographic protocols used to secure the internet and financial transactions of today are all susceptible to attack by the development of a sufficiently large quantum computer. The quantum threat will increase data breaches of sensitive health and financial personal data, challenge the integrity of digital documents and break certain cryptocurrency encryption.

Although there is a wide range of opinions on when quantum computers might be powerful and stable enough to affect our current encryption systems, it is important to note the issue is not necessarily when the quantum threat materializes, but what the relative risk is over time. Furthermore, with the risk of “harvest now, decrypt later” attacks, where attackers collect confidential encrypted data to store until they can decrypt it using quantum computers, it is critical to act now.

In other words: we need to protect today’s secrets against tomorrow’s quantum attackers.

In terms of the storage structure of cryptocurrency, Bitcoin and Wakacoin adopts addresses, and Ethereum adopts accounts.

The advantages of using addresses as the storage structure of cryptocurrency are simple architecture and high privacy protection. The advantage of Ethereum adopting the concept of account as the storage structure of cryptocurrency is that it is closer to the subjective cognition of users. However, sticking to the user’s intuition means that the architecture is often complicated.

Ethereum shortened the block time to more than a dozen seconds, resulting in a large number of candidate blocks in the mining process of the miners. Just try to imagine that when many nodes around the world mine at the same time, when the block time is only a dozen seconds, a large number of candidate blocks are bound to be generated at the same time. To solve this problem, Ethereum uses complex rules to solve it. In addition, Ethereum embeds Smart Contract directly into the blockchain, yet another complex feature. Because the structure of Ethereum is very complex, and the resulting blockchain is also very large, it may be difficult for you to find someone who has a complete Ethereum blockchain ledger.

Today, we can all understand several facts. First, blockchain is indeed a useful technology. Second, the concept of blockchain is a very inefficient P2P network. Third, the simpler the architecture, the easier its open source code is to be understood independently by one person; conversely, complex architectures require a group of people to work together to maintain, and they often only understand part of the open source code. Finally, since the blockchain is based on the concept of the distributed ledger to achieve the ideal that the ledger can not be tampered with, all nodes holding a complete ledger should be able to verify the ledger in their hands at any time.

The architecture of Wakacoin is designed to be as simple as possible and to implement the Smart Contract feature in an original idea. The architecture of Wakacoin blockchain is simpler than that of Bitcoin and does not support any scripting language. This means that the open source code of the Wakacoin blockchain can be easily understood by a programmer, confirming that the content of the code is indeed safe.

The Bitcoin blockchain did not implement the Smart Contract feature. A few years later some people used the middle layer concept as the smart contract layer for Bitcoin.

In the Wakacoin blockchain, since a block is generated on average every 10 minutes and a new wakacoin is minted in each block, about 50 thousands wakacoins are added every year. Some wakacoins may be permanently unavailable due to the loss of Private Key by users, so it is necessary to add about 50 thousands wakacoins every year to ensure that the total amount of wakacoins recycled and reused is maintained at about 20 million wakacoins. Since each transaction needs to pay 1 wakacoin fee to the miners, the Wakacoin blockchain is formed as a cryptocurrency system that promotes circulation.

The Wakacoin blockchain open source code stipulates that each transaction requires 255 confirmations. Since the hash superposition of more than 255 blocks ensures the security of the chain and the security of transactions, hackers cannot conduct the 51% attack, and the protection of the chain no longer needs to consider the amount of computing power.

According to the above consensus, the total amount of Wakacoin issuance is about 20 million. Moreover, about 50,000 wakacoins will be added every year.

Since Wakacoin adopts a fixed transaction fee in its consensus protocol -- each transaction must pay 1 wakacoin fee to miners, ensuring fairness and sustainability. Fairness means that miners may receive the same block rewards whenever they participate. Sustainability means that there will always be enough incentives for miners to participate.

Wakacoin blockchain is a fully decentralized public chain, supporting a variety of traditional blockchain operation modes. For example, miners set up their mining hardware, mining pool, exchanges and so on. All of these applications need to download and use the source code to set up. 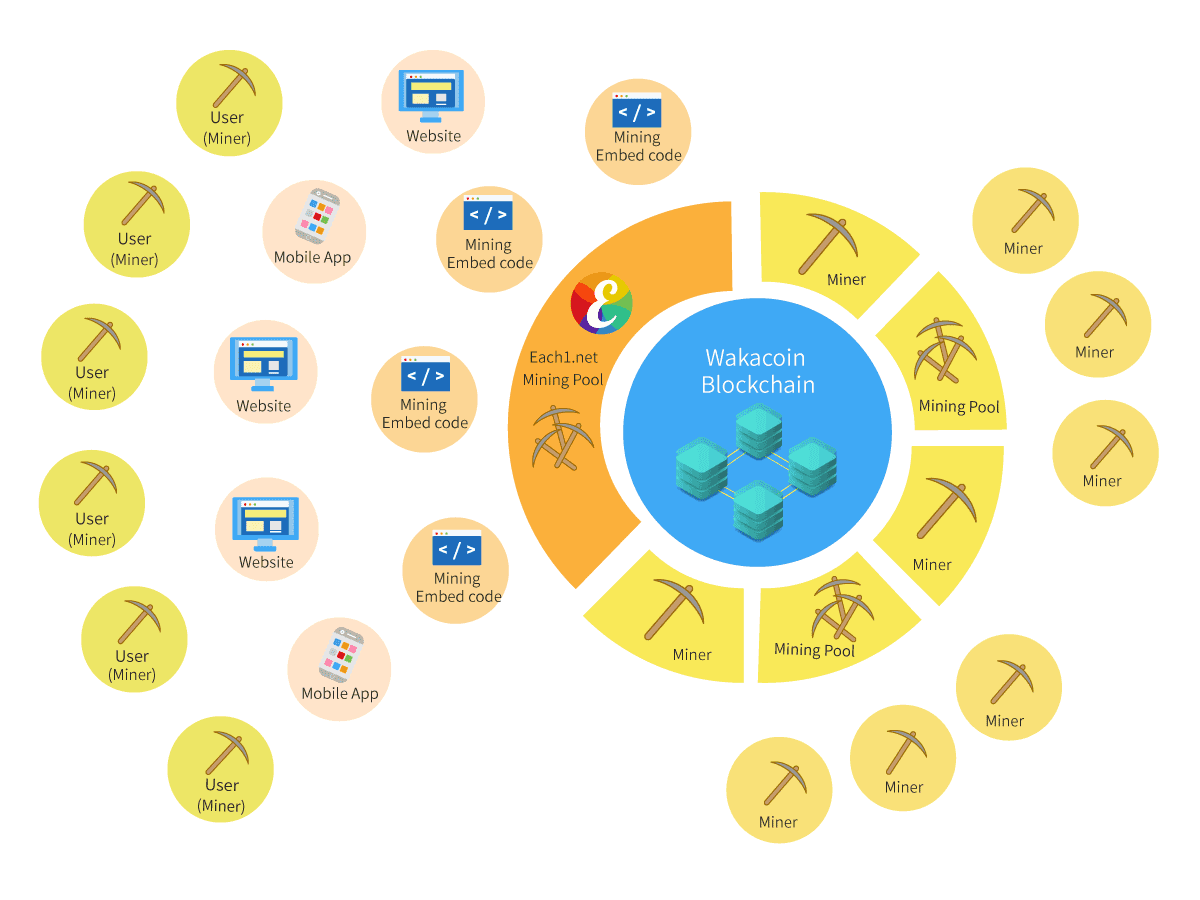